What is it all about?

How to bring More Truth, More Aliveness and More Spontaneity To Your Work?

Acting, improvising is all about observing and responding. For Improvisers, you can’t make a proposition, you can’t take the story forward, you can’t say ”what happens next” if you don’t know what’s really happening right now. (Unfortunately the audience invariably does know cf Keith Johnstone)

So how do we work on that?
The Meisner Technique is a series of exercises  designed not only to focus your attention onto your playing partner but to also actually increase you powers of attention.

Meisner’s intention  was to shift your focus from yourself and simultaneously put you in the present moment.

I think this is the basis for all good acting and all good improvisation. Now obviously, that is a banal statement that I’m sure everyone, actor, improviser or teacher agrees with.

What makes the Meisner techniques cool and so useful?  Those specifically conceived exercises give us a concrete definition of what the moment is and how to be in it. It changes what seemed like an abstract unreachable idea in a rehearsal room into something tangible, concrete, achievable.

Now that’s not the whole story: Later, there’s another set of exercises that help you to understand what it means to live in the given circumstances provided by the text/ the set up or the format and/or your director.

So you can learn to observe and respond within the framework of the story.

All of this happens in a pedagogically coherent manner like learning to play an instrument or learning a language.

In my experience this technique will help you to see better and respond more truthfully and spontaneously on stage all from what is really going on with your partner.

Why not comedown and see if it works for you ? 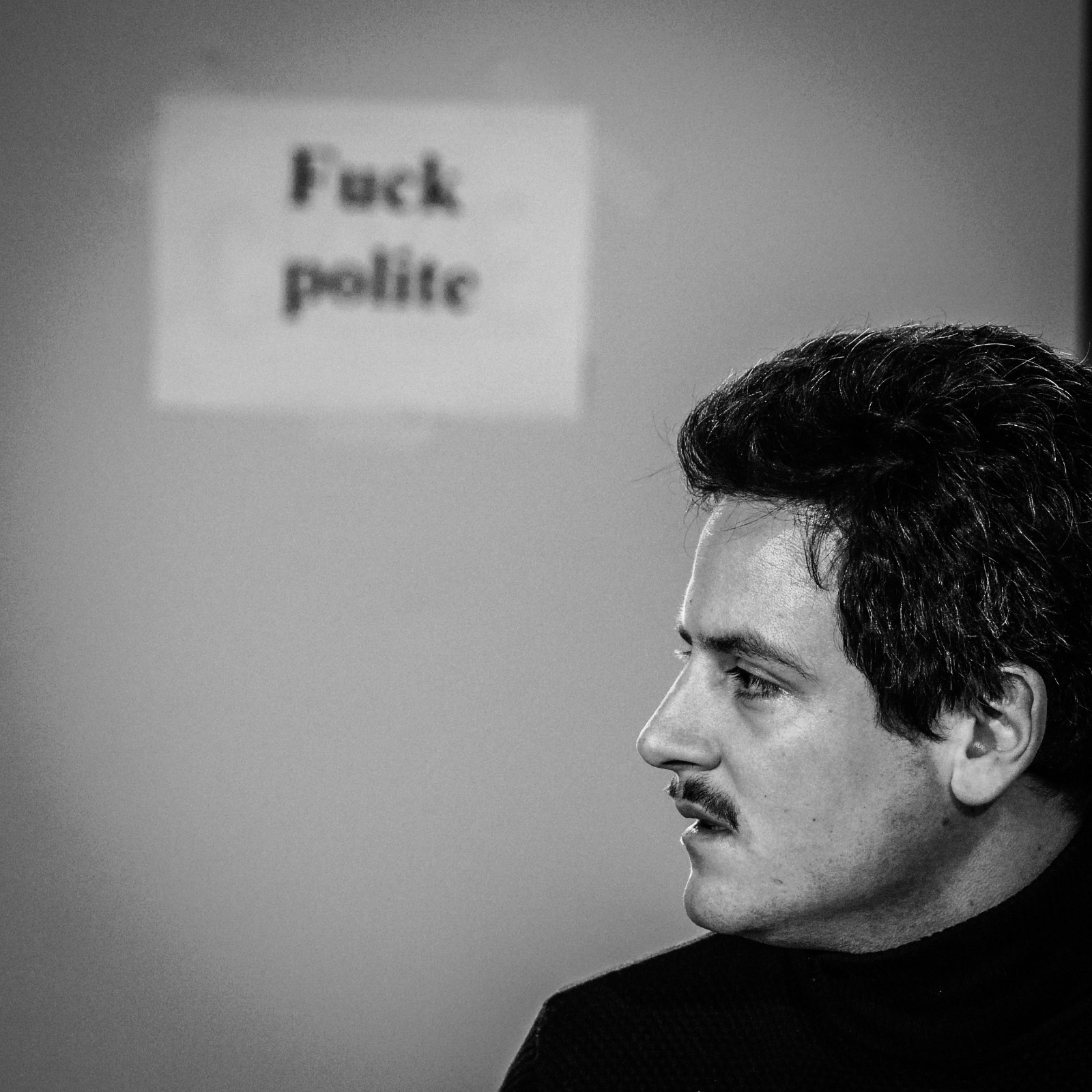 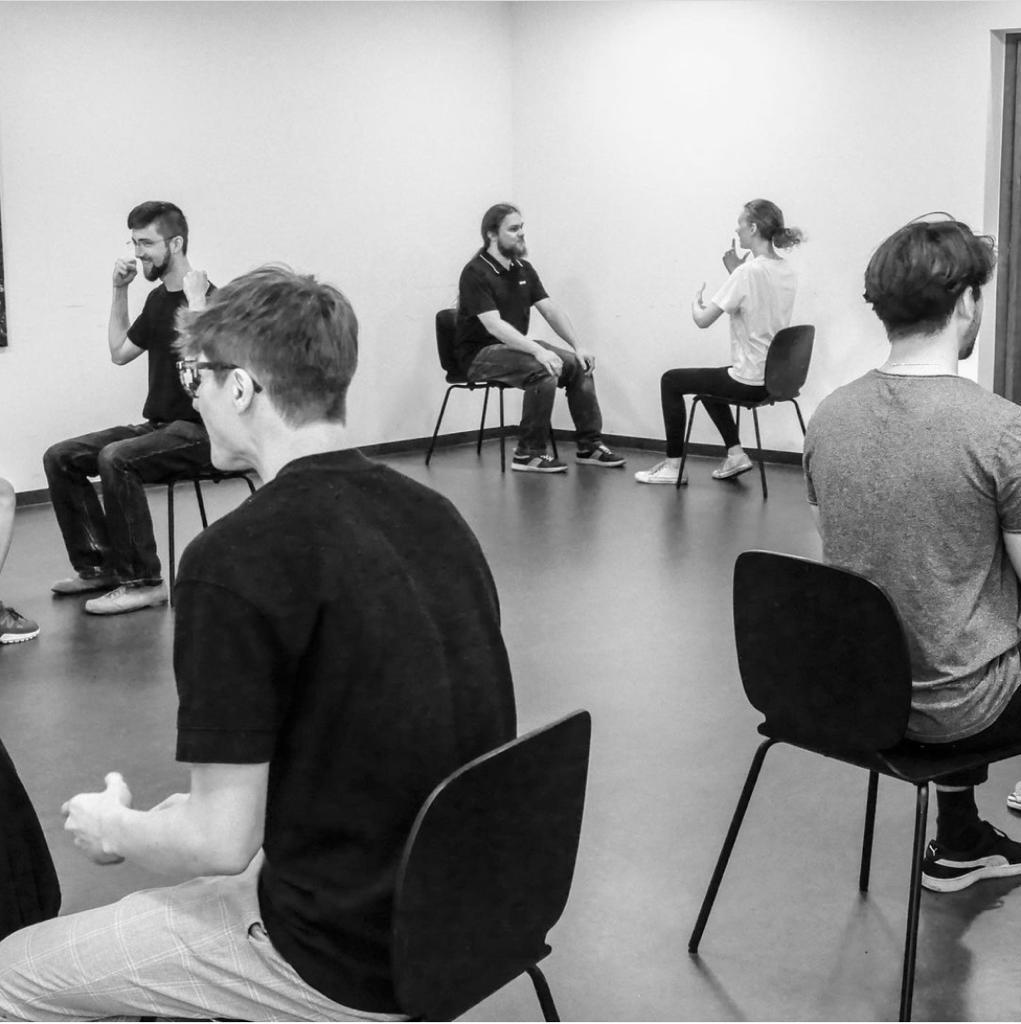 The amazing Keith Farquhar is coming to Vienna. Ther are a lot of interesting workshops with him. All workshops are taught in english, though language is not that important. You will be free to speak any language you like.

For questions contact Soli and Edward per Email: actingworkshopsvienna@gmail.com

For everyone who books a workshop through ViennaImprov get’s 10% discount!

Mention VIENNAIMPOV10 in the booking form.

“Schnupperabend – Meisner: Basic-Advanced”
Just come by! No prior registration.

Just come by – no prior registration necessarry.
If you’re curious and have no idea what all of this is and how it can help you in your acting skills – try it out! It can be an eyeopener!

Everything you need to start a scene, is already there and will be delivered in each and every second. When you focus on your partner, you will realize that his behavior is a responding to your reactions and that works both sides! Learn the skills to be in the moment so you can create more powerful scenes, whether its improv or acting…  Call the Moment, repeat and change when it has to change – that is the key. Basic MeisnerTechnique with emotional preparation, Knock on the door, activities, monologues – perfect for creating scenes and characters in improv.

This is our daily class for advanced and beginner. Meisner: 3 Moments, repetition, activities and more.
You can be as flexible as possible and even book each day extra! Work 8 hours on your technique and if you like: work more days!

Scenework for actors, acting students and those who are interested in a play!
If you want to work deeper at your acting skills and see how a word or a line can be more meaningful by doing your inner work:  Keith is teaching you the best techniques from D. Memet, I. Chubbuck and S. Meisner. It’s a scene work class where you will work with scripts and experience the effect of the techniques in your work.

Everything you need to start a scene, is already there and will be delivered in each and every second. When you focus on your partner, you will realize that his behavior is a responding to your reactions and that works both sides! Learn the skills to be in the moment so you can create more powerful scenes, whether its improv or acting…  Call the Moment, repeat and change when it has to change – that is the key.Basic MeisnerTechnique with emotional preparation, Knock on the door, activities, monologues – perfect for creating scenes and characters in improv. 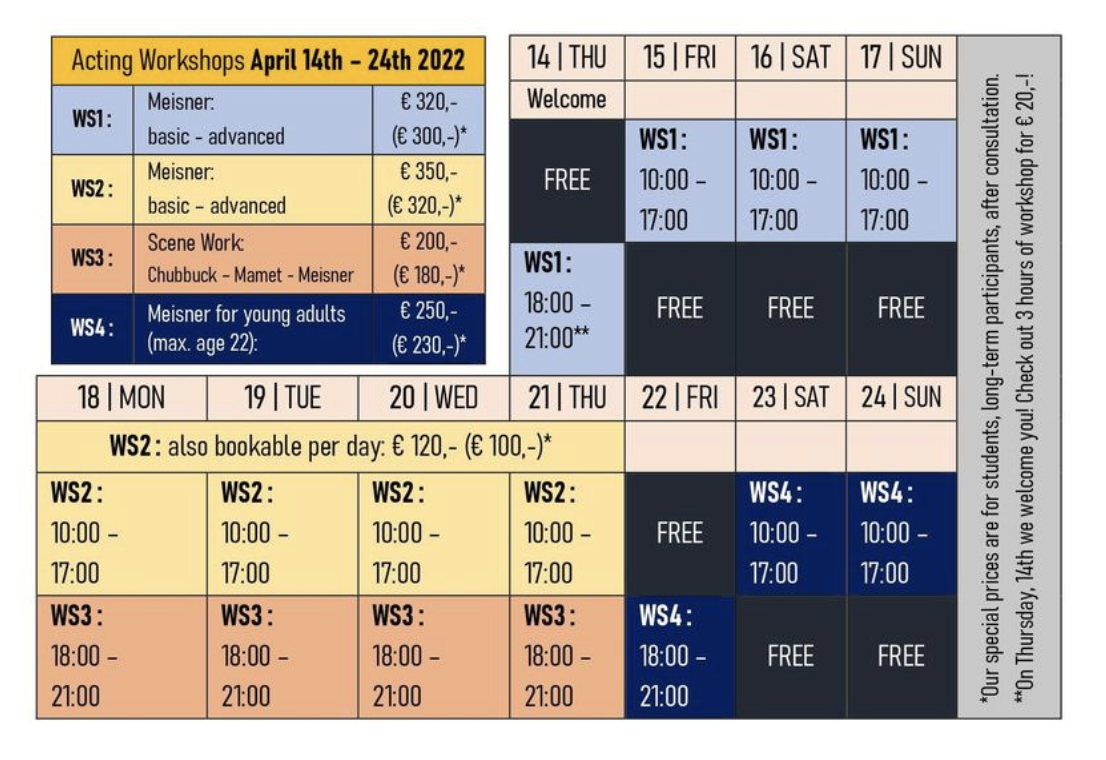 Who is a returning teacher to our Vienna improv/acting community!

Keith, 57, is an Anglo French actor, director and acting coach. Recently he’s been in the Netflix show « les 7 vie de Leah », the movie « Reprise en Main » and toured Tunisia with a Yasmina Reza play. He’ll be shooting in the Movie White feather this summer. He studied and teaches a mix of The Meisner technique, the Keith Johnstone system, The Chubbuck Method and David Mamet’s approach.He believes like life, all acting is improvising.

He started teaching theatre at 16 working with kids during the summer holiday and apart from a fifteen year hiatus to play in a rock band he’s been teaching ever since.

For the past twenty years he’s used improv and elements of the Meisner technique to teach public speaking, negotiation and self confidence at Lyon Jean Moulin University. He’s also head of theatre at Atre école de théâtre in Lyon, a theatre school in Lyon that gives a state qualification .

He developed his eye for staging, working as an assistant to numerous directors at Lyon Opera such as Peter Stein (Schaubühne , Berlin head in the 60’s) Yoshi Oida, Declan Donnellan and of course Keith Johnstone.

Yes, there is always more to know!

Yes, it´s still a thing as you know…we can´t predict how the situation will be, but some straight forward rules we can apply: